I used to watch TV quite regularly when I was doing my schooling. I completed 12 standard in 2002. Since, then I have watched TV only now and then and during the vacation time I spent at home. When I was still going to school I saw that various programs on TV were sponsored by giants in the business world like - Pepsi, Coke, Goderej, Reliance, etc. These companies would get slots between the program to show-off their brands.

But, nowadays a lot of universities are seen to be sponsoring TV programs. I could see more advertisements of various universities and educational institutions than those of Coke and Pepsi. These universities are spending a lot on adervtising in all forms TV, newspapers (some of them give full page advertisements) and the internet. The private universities in India adopt the business model - in which fees is their primary source of earning. So, they want more and more people to know (hence, advertising) about their university, so that more and more number of people would join them and be a revenue source to the university.

I believe a university must be known by the work it does not by the number of places it advertises. But, unfortunately that is what is happening.
Posted by Shishir Pandey at 2:02 AM 3 comments:

Orkut goes for a toss!!

Facebook is the most popular social networking site in the world. But, in India Orkut is the biggest hub. People in India are more loyal to Google (although Facebook is catching up). Orkut has a number of flawes I do not know if people have noticed it or not.
Orkut counters (the ones that show you the number of fans, number of scraps on your home page) are hopeless. The number of scraps keeps fluctuating between the real value and plus-minus 2 scraps. The number of fans sunndenly become less.
The best of all, Orkut cannot differentiate (sometimes) between male and female. For and example consider the image posted above - It has been cut from the feeds that I received on my home page, it says "Varun.. received comments on her photo". Varun is a guy (even as per what Orkut has in its database).

Google Hacked or What??!! 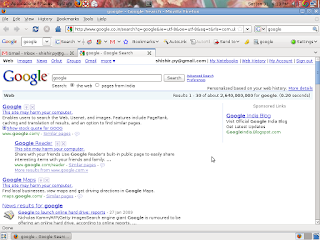 I attach a screen shot of the google search for 'Google'. The results have a link "This site might harm your computer" for every result that is shows even for Google itself!!!

What happened to google? Have they been hacked or their algorithm has gone for a toss??
Posted by Shishir Pandey at 8:12 PM 4 comments:

The next day I had plans to go to Ranganathitu (a bird Santuary) in Mysore. In the peak season there are about 13000 birds in the santuary (I do not know how many species). I had to use my new camera - The Sony CyberShot H-50 to capture some pictures of the birds there. Arpan and I went to the sanctuary by 3:00 pm. I was so disappointed on reaching there, very few birds were there. The people at the sanctuary told us that December is not the season. The birds will be back in feb. "Oh Shit!!!" (what a bad time for a vacation). We did take the boat ride and tried to capture whatever birds were there. There were number of bats hanging from the tree and of course a few crocodiles.

Here are some pictures taken at Ranganathitu: 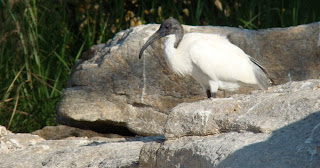 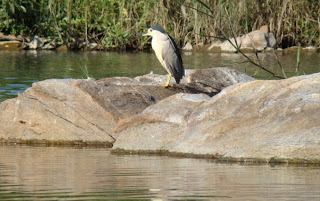 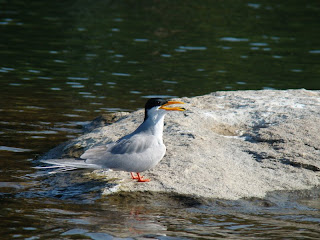 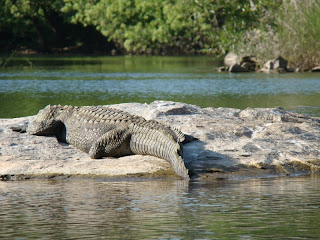 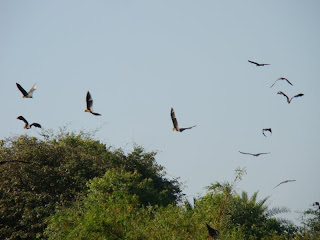 MORE TO BE ADDED...keep watching..
Posted by Shishir Pandey at 3:37 PM 1 comment:

The Journey (Part I)

In this post I mention about my journey from Mumbai to home (Jamshedpur). The route I took was from Mumbai-Bangalore-Mysore-Bangalore-Jamshedpur. Your really do not have to take this route; there are direct trains from Mumbai to Jamshedpur (Tatanagar, is the name of the station); but I have my reasons. The earlier plan was to go to Mysore and then to Jamshedpur from there. I earlier worked at Infosys, Mysore and I had not completely shifted from the place i.e. I still had some stuff (mostly cloths) to be brought from Mysore, so I had planned to go to Mysore. Plus this would give me an opportunity to meet old friends. I later decided to stop over at Bangalore because there was a conference (FSTTCS) at the Indian Institute of Science (IISc) campus.

I reached the IISc campus in the morning of 8th December 2008. I was accompanied with Chinmoy (grad student at TIFR) and Shreyas (grad student with IITB). I was alloted a room at the Hoysala Guest house. Some of my friends had received accomodation in hostle on a sharing basis. We went around the campus, met Kavitha (earlier a grad student at TIFR now a faculty at IISc) and then we went to the Microsoft Research Bangalore because Chinmoy had to meet someone.

The next day we went for the presentations at the conference. And in the evening IISc had a movie show ('A Wednesday') in the gymkhana. The next day I had to go to Mysore. I reached Mysore at 6:00 pm the next day. I reached home (my home when I was in Mysore). No one was there but I knew where the key was (the same old place). And then I called Arpan because his bike was parked in the parking area, he was not to be seen anywhere. He told me he would be coming home in some time (it took around an hour for him to come home).

That night we had plans for the dinner outside but this lead us to another problem, one which we always face in such a situation, - 'Where should we go?' . There were certain constraints that we had to fulfill. We could not go to some places because some of the friends were having party the next day and they were not ready to go to the same places. Ashish came up with a place, he wanted to try a new place (because is the new restaraunt explorer) but we were not ready for that. Our experience with new places had been really bad, and we were in no mood to have a bad time. We finally decided to go to 'Jewel Rock' a new restaurant to me but not to the others. The food was good. And once we finished the dinner we went to Chamundi Hill. There is a temple at the top of the hill. But we were not going to the temple and any ways at 10 in the night the temple is not open. But the view point at the top of the hill was kind of our hangout place. Had a lot fun there, and gossiped about people :-). I had to catch up on things that I had missed. Here are a few pictures that I took at the Chamundi Hill. 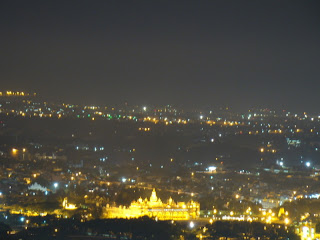 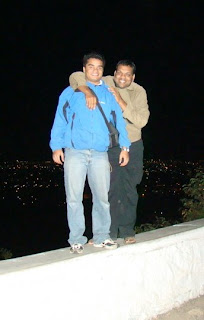 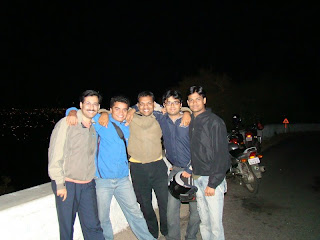 Some pictures at the Mysore Palace. 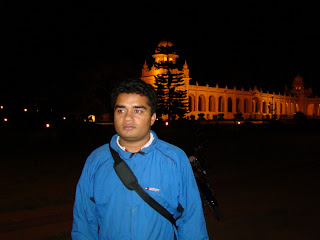 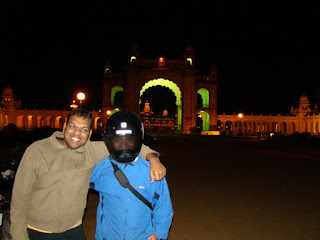 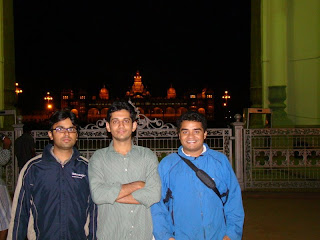